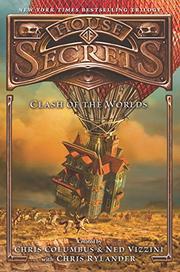 CLASH OF THE WORLDS

From the House of Secrets series, volume 3

Following the 2013 death of co-author Vizzini, Rylander joins the team for the conclusion to the book-world–hopping House of Secrets series.

Starting immediately where Battle of the Beasts (2015) left off, the Walker children are losing their house (and father) to the family patriarch’s gambling addiction, and their fictional colossus friend, Fat Jagger, has escaped from his book world into their own—and he’s not the only character to cross over. To fix the situation, they need help from an old, dead enemy, but in seeking it, they inadvertently start a zombie apocalypse. In a frantic attempt to repair reality, they return to the pulp-fiction book worlds one more time, in pursuit of three objects that will enable them to permanently seal the realities off from one another before the Wind Witch can lead an army into San Francisco. For a large chunk of this chunky book, the three siblings separate to go after each token, and the constant life-threatening danger (and chapter-ending cliffhangers), paired with the episodic nature of the plot, begins to wear thin. The less the three work together, the more the Wind Witch can use them against one another. The action is nonstop, and likable side characters find themselves paying high prices as the kids skip through Western, science-fiction, fantasy, and other worlds. The children have to work hard for their happy ending.

Generally, an enjoyable book with high stakes and a solid ending, despite the mushy middle.