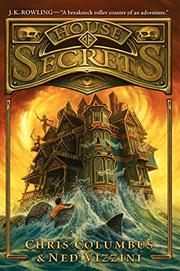 Columbus and Vizzini craft a fast-moving, cinematic narrative that packs plenty of punch but may still have trouble measuring up to the competition.

The plot is predictable yet peculiar. Three kids lose their parents suddenly—and horribly—before being thrust into a series of manic adventures. The action ping-pongs wildly from a primeval forest peopled by savage warriors to the high seas, festooned with murderous pirates and hungry sharks, to a medieval-style castle ruled by a vicious queen. The children are cardboard characters at best: Cordelia, the brainy, bookish oldest sister; Brendan, the hyperactive, game- and sport-obsessed 14-year-old brother; 8-year-old Eleanor, spunky and sweet with a learning disability thrown in for spice (and plot potential). Secondary characters are even more sketchily drawn, which suits perfectly in some cases but weakens their impact in others. The text often reads like a script, providing direction rather than description. Some details seem gratuitously gross and/or violent, and the dialogue doesn’t always ring true. Worst of all, how the authors get their heroes out of trouble and back to the real world seems anticlimactic and, even within the fantastic framework of the story, not entirely believable.

Ending with the promise (or threat) of further adventures, this is clearly intended to be the next big thing—whether it fulfills that ambition remains to be seen.