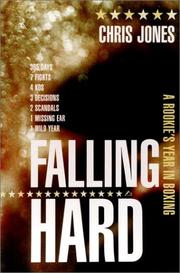 A Rookie’s Year in Boxing

Entertaining if glib account of a neophyte journalist’s year on the boxing circuit.

Jones’s prologue recounts how he started writing on a whim at age 25, covering boxing for a new Canadian newspaper, the National Post. Such insouciance informs this narrative; Jones adheres to the greenhorn’s tactic of inserting himself unnecessarily into the action (as at Muhammad Ali’s birthday reception: “He casts his wide eyes toward me. ‘Happy birthday, champ,’ I say. Even though he can’t hear me, I’m sure he feels the reverence. My present to him”). Fortunately, Jones’s prose moves crisply in this spare volume, and often registers clever or darkly amusing hits, as in his interpretation of boxing’s corrupted priorities: “Break a man, that’s good. Break a rule, that’s bad. . . . [Mike Tyson] can fall as far as he likes, because his woe makes for stories that sing.” Jones is at his best when examining the sport’s many overlooked or over-the-hill contenders, like Trevor Berbick, a rough-hewn 48-year-old journeyman who seems washed up, yet knocks out Shane Sutcliffe in a brutal Canadian championship. Jones covers seven major fights during his year of boxing journalism, and detects an unsavory pattern in which soulful, dedicated athletes are doubly undermined, by the sport’s physical toll and by the chicanery of promoters like Don King (whom Jones even questions, about whether he’d rigged the first of two contested Lennox Lewis–Evander Holyfield bouts). He’s also attuned to the sport’s uneasy multiracial future, represented by “Prince” Naseem Hamed, a grandstanding Yemeni-English featherweight who fights Mexico’s Cesar Soto in a blasted Detroit, once a major boxing town, now dependent for an economic boost on this infrequent bout which turns “disappointing, brutish, and inelegant.” Overall, Jones offers crisp portraits of contemporary boxing’s noirish desperation (he even finds the fellow who recovered Holyfield’s ear after Tyson’s infamous chomp), but is too often preoccupied by the lesser personal dramas of a young reporter on the road.

An astute if youthful take on a violent, timeworn subject.