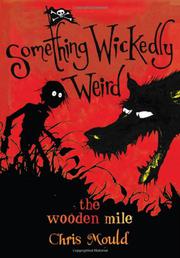 A prolific British illustrator makes a rare foray across the pond with this faintly Gothic series opener. Eleven-year-old Stanley is amazed to learn that he’s inherited an old mansion in Crampton Rock—a distant seaside town whose residents turn out to include a candy-store owner who changes into a werewolf every night, a trio of menacing (if ineffectual pirates) and a supposedly dead pike that utters cryptic warnings. Fortunately, Stanley is a clever, doughty lad, well capable of blasting the werewolf with a silver bullet, tricking the pirates into barrels and weathering other challenges with just occasional help from adult allies. Mould adds plenty of comically ghoulish ink drawings and silhouettes to his fluently written tale, and sets up a continuing plotline that leads to encounters with a decapitated ghost and more pirates in the next episode, The Icy Hand (ISBN: 978-159643-385-4, also September). Fine fare for fans of the likes of Paul Stewart and Chris Riddell’s Far-Flung Adventures series or Philip Ardagh’s Eddie Dickens trilogy. (Fantasy. 9-11)