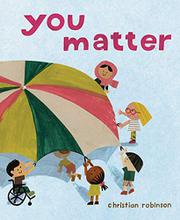 Employing a cast of diverse children reminiscent of that depicted in Another (2019), Robinson shows that every living entity has value.

After opening endpapers that depict an aerial view of a busy playground, the perspective shifts to a black child, ponytails tied with beaded elastics, peering into a microscope. So begins an exercise in perspective. From those bits of green life under the lens readers move to “Those who swim with the tide / and those who don’t.” They observe a “pest”—a mosquito biting a dinosaur, a “really gassy” planet, and a dog whose walker—a child in a pink hijab—has lost hold of the leash. Periodically, the examples are validated with the titular refrain. Textured paint strokes and collage elements contrast with uncluttered backgrounds that move from white to black to white. The black pages in the middle portion foreground scenes in space, including a black astronaut viewing Earth; the astronaut is holding an image of another black youngster who appears on the next spread flying a toy rocket and looking lonely. There are many such visual connections, creating emotional interest and invitations for conversation. The story’s conclusion spins full circle, repeating opening sentences with new scenarios. From the microscopic to the cosmic, word and image illuminate the message without a whiff of didacticism.

Whimsy, intelligence, and a subtle narrative thread make this rise to the top of a growing list of self-love titles.