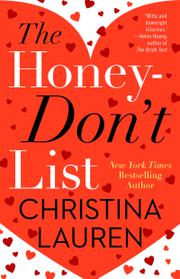 A toxic workplace nurtures an intoxicating romance in Lauren’s (The Unhoneymooners, 2019, etc.) latest.

Rusty and Melissa Tripp are the married co-hosts of a successful home-makeover show and have even published a book on marriage. After catching Rusty cheating on Melissa, their assistants, James McCann and Carey Duncan, are forced to give up long-scheduled vacations to go along on their employers' book tour to make sure their marriage doesn’t implode. And the awkwardness is just getting started. Stuck in close quarters with no one to complain to but each other, James and Carey find that the life they dreamed of having might be found at work after all. James learns that Carey has worked for the Tripps since they owned a humble home décor shop in Jackson, Wyoming. Now that the couple is successful, Carey has no time for herself, and she doesn’t get nearly enough credit for her creative contribution to their media empire. Carey also has regular doctor’s appointments for dystonia, a movement disorder, which motivates her to keep her job but doesn’t stop her from doing it well. James was hired to work on engineering and design for the show, but Rusty treats him like his personal assistant. He’d quit, too, but it’s the only job he can get since his former employer was shut down in a scandal. Using a framing device similar to that of Liane Moriarty’s Big Little Lies, the story flashes forward to interview transcripts with the police that hint at a dramatic ending to come, and the chapters often end with gossip in the form of online comments, adding intrigue. Bonding over bad bosses allows James and Carey to stick up for each other while supplying readers with all the drama and wit of the enemies-to-lovers trope.

When a book has such great comic timing, it's easy to finish the story in one sitting.