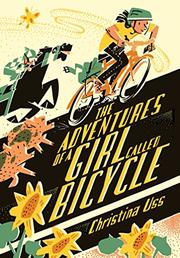 THE ADVENTURES OF A GIRL CALLED BICYCLE

Twelve-year-old Bicycle secretly takes off from Washington, D.C., on her steadfast bike, Clunk, and heads to San Francisco by herself to find her bike-racing hero, Zbig—and, hopefully, her first real friend.

Brought up at the Mostly Silent Monastery since she was 3 and home-schooled there, Bicycle understands that loving (and indomitable) Sister Wanda has signed her up for the Friendship Factory Spring Break Special for her own good. But it sounds like a “guaranteed nightmare”; introverted and reflective, with a penchant for wordplay, she needs to seek friends in her own way. In this impressive debut, Uss deftly mixes in elements of fantasy, magic, and mystery—a chatty ghost that haunts Clunk’s handlebars, a second bike that can write and launch missiles, a creepy lady in black with “eyes that freeze your heart”—while always remaining true to the reality of Bicycle’s journey. The author, a cross-country bicyclist herself, perfectly captures the rhythms of day-to-day life on the road: the joy, the hardships (“But everything is just so…big. Crazy-hilly and big!”), the growing sense of freedom and accomplishment, the stick-to-itiveness, the great hunger and the delicious food that relieves it, the kind people, and the bonding with one’s bike. Though it has a substantial cast of quirky supporting characters, the book’s default is white.

Readers will eagerly join Bicycle and “pedal headfirst” into this terrific adventure, which is chock-full of heart and humor.