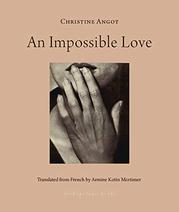 The most recently translated autofiction by controversial French literary phenomenon Angot brings her unflinching intelligence to a terrible childhood trauma.

The novel starts with the love story of the narrator's parents. It's the 1950s in the small French town of Châteauroux when beautiful, impoverished Rachel meets Pierre, the cultured scion of a wealthy Parisian family. Rachel lives with her younger sister and works at the Social Security office. Pierre is a translator at the nearby American military base. Rachel's parents are not much present, her mother due to ill health, her father because, being Jewish, he spent the war out of the country; he appears only to criticize and reject his offspring. Rachel's love for Pierre is unanalyzed, naïve. He seems extraordinary and unconventional, unlike her small-town suitors. When he explains that he will never marry her, because he needs to feel free and because her family isn't wealthy, she understands, even though "When you went out with a man, and you weren't married, you know, in those years, you were like a piece of trash." Likewise when she gets pregnant and he refuses to come see her, choosing instead to vacation in Italy. She raises their daughter, Christine, on her own while working full time during a period when most mothers stayed home. She calls the girl "my little fawn," and Christine adores her. Then Pierre reappears, now married to a rich German with whom he has started a family. Rachel implores him to recognize Christine officially. They're moving to Reims for her new job, and no one there knows her history. At last, complaining, he agrees, and Christine takes his name, Angot. He begins to visit, taking her to restaurants and away on weekend trips, encouraging her studies. Starved for paternal affection, adolescent Christine is entranced by her father's style and money, his education. A chasm opens between her and her mother. And a terrible secret divides them. The slow, painful healing of their rift is deeply moving. (When, a grown woman and mother herself, Christine begins to call her mother Maman again, it's "like a little bell at last repaired.") Described without overstatement or sensationalism, raw and honest, their experience rings brutally true. What began as a love story ends as an indictment of generations of internalized misogyny, antisemitism, class warfare, and the abuse of power.