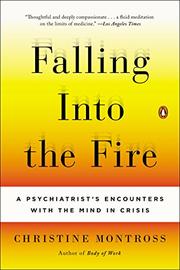 FALLING INTO THE FIRE

A Psychiatrist's Encounters with the Mind in Crisis

In her residency and now as a professor (Psychiatry and Human Behavior/Warren Alpert Medical School, Brown Univ.) and a hospital inpatient psychiatrist, Montross (Body of Work: Meditations on Mortality from the Human Anatomy Lab, 2007) describes her encounters with patients in crisis, first admitted to emergency rooms and then referred for hospital stays.

The cases are bizarre: a woman repeatedly admitted for swallowing objects—light bulbs, pens, nails; a man who keeps tearing at his skin and hair, spending thousands on treatments to correct his “ugliness”; a woman so able to feign an epileptic seizure that staff feared she might die from status epilepticus; a mother terrified she would kill her infant, so she “hid all the knives.” Montross writes of these encounters with a dramatic flair, ever empathetic but unsparing of occasional negative feelings, fears and frustrations. Diagnosis is not always easy. Even when a patient’s back story reveals plausible causes of illness, there is little therapy can do if the patient is unwilling, given the limitations of insurance and the need to discharge patients once “stabilized.” Oddly, patients afflicted with extreme forms of body dissatisfaction—who want a limb amputated, for example—are “cured” if the surgery takes place. In the absence of cures, Montross offers solace—just being there with a patient. She provides background and current thinking on the particular cases she describes, discusses the legal issues of involuntary treatment and inveighs against academics who see mental illness as one side of creative genius. As an antidote to her daily coping with extreme behaviors, Montross writes serenely of a home life with her family.

No triumphs of modern psychiatry on display here, but rather a sympathetic portrait of seriously ill patients that could guide future practitioners on the art of helping, if not always healing, the sick.