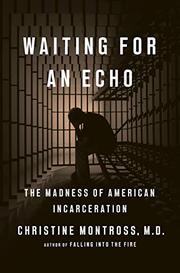 WAITING FOR AN ECHO

The Madness of American Incarceration

A searing indictment of a system in which far too many people “languish within prisons and jails because of their poverty, their race, their addiction, or their mental illness.”

Psychiatrist Montross, who is accustomed to treating mentally ill clients in hospital settings, decided to explore what happened to similar people who landed in the American prison system. What she learned was horrifying—and not just for the inmates. Through her firsthand experiences and diligent research, she concludes that everybody in American society—the imprisoned mentally ill, the rest of the prison population, prison staff, police, attorneys, judges, jurors in criminal trials, loved ones in the free world, residents of neighborhoods into which former inmates have been released, and taxpayers whose money pays for punishment instead of rehabilitation—experiences harm from the status quo. Montross divides the book into three parts—“Our Prisoners,” “Our Prisons,” and “Our Choice”—each undergirded by copious anecdotes involving real people in distress. In the first section, the author explains why so many obviously mentally ill women and men end up in prison. As she notes, most crimes they commit are caused, at least in part, by their mental illness, and prison staff members are woefully unqualified to deal with psychiatric issues effectively. The second section includes chilling case studies of ineffective incarceration, especially regarding solitary confinement. The final section offers some hope, as Montross chronicles her research in Norway, where prisons have drastically lowered recidivism rates by emphasizing human rehabilitation. So why does the U.S. refuse to learn from such success stories? Montross consistently wrestles with that conundrum, but answers are elusive. In conclusion, the author quotes James Baldwin: “Nothing can be changed until it is faced.” In this revelatory book, the author faces the problem head-on. Read this and then turn to Jason Hardy’s The Second Chance Club to learn more about what happens after inmates are released.

Yet another eye-opening, powerful demonstration of the profound structural problems with mass incarceration in the U.S.