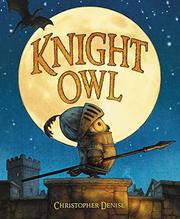 Owl, an adorably earnest and gallant little owlet, dreams of being a knight. He imagines himself defeating dragons and winning favor far and wide through his brave exploits. When a record number of knights go missing, Owl applies to Knight School and is surprisingly accepted. He is much smaller than the other knights-in-training, struggles to wield weapons, and has “a habit of nodding off during the day.” Nevertheless, he graduates and is assigned to the Knight Night Watch. While patrolling the castle walls one night, a hungry dragon shows up and Owl must use his wits to avoid meeting a terrible end. The result is both humorous and heartwarming, offering an affirmation of courage and clear thinking no matter one’s size…and demonstrating the power of a midnight snack. The story never directly addresses the question of the missing knights, but it is hinted that they became the dragon’s fodder, leaving readers to question Owl’s decision to befriend the beast. Humor is supplied by the characters’ facial expressions and accented by the fact that Owl is the only animal in his order of big, burly human knights. Denise’s accomplished digital illustrations—many of which are full bleeds—often use a warm sepia palette that evokes a feeling of antiquity, and some spreads feature a pleasing play of chiaroscuro that creates suspense and drama.

A charming blend of whimsy and medieval heroism highlighting the triumph of brains over brawn.