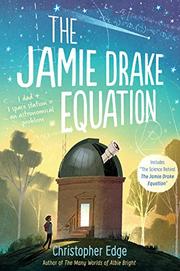 Sixth-grader Jamie Drake has an alien on his cellphone and his parents are splitting up. What more could go wrong?

This middle-grade science-fiction title, first published in England, is reminiscent of the most engaging early Heinlein stories in which realistic boys face traditional problems in a futuristic setting. Here, Jamie’s father, an astronaut on the International Space Station, is preparing to launch a series of probes to Tau Ceti, a nearby star system known to have orbiting planets in the habitable zone (true fact). Jamie, however, has complicated feelings about his famous father, gracefully expressed in Jamie’s candid narration. He’s proud, of course, to have the world focused on his father’s actions—there’s even a video interview at an all-school assembly—but he’d also rather have him home in England for his birthday and to patch up the growing rift in his family. Then the unhappy boy happens upon an astronomer who’s hacked into the Hubble Telescope for her own search for extraterrestrial intelligence. Attempting to charge his phone on her computer, Jamie accidentally intercepts a transmission and captures the Hi’ive. Then there’s a solar flare. His father may be stranded in space. Jamie’s emotions are totally accessible even though his circumstances fall significantly outside the norm. The book assumes a white default.

With solid science and believable family conflicts, this will be very satisfying to readers whose wishful thinking can suspend disbelief.