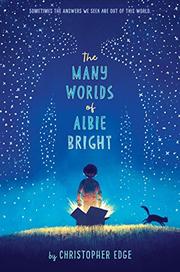 THE MANY WORLDS OF ALBIE BRIGHT

In theory, this adventure based in quantum physics could have gone on for another 100 chapters. In theory, it could have kept going forever.

The structure of the book is simple: Albie, an English lad, visits a parallel world, and then he visits another one. He does this by climbing inside a tiny Schrödinger box (the kind that held Schrödinger’s cat). It’s powered by something Albie calls Quantum Banana Theory. Scientists might quibble about the details. It really operates on what could be called the “Roger Rabbit principle”: it works because it’s funny. But like most comedies, the novel is based around a tragedy. Albie’s particle-physicist mother died two weeks before the start of the book, and he’s looking for a world where he can talk to her again. Many of Albie’s adventures are amusing or suspenseful, but each world is a little sadder than the last, because Albie’s mother is never there. Every world feels distinct and surprising, but Edge’s writing does have one odd quirk: a lack of physical description. Readers will need to use deductive reasoning to guess the races of most characters: Albie has green eyes and dark-brown hair, implying that he is white, and his best friend is a British-Asian boy named Kiran Ahmed. Albie’s reunion with his mother, when it comes, is utterly heartbreaking, and readers may be grateful they had so many chapters to prepare for it.

The book is actually quite short, but it turns out to be exactly the perfect length.