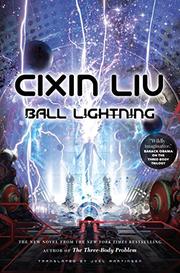 A new science-fiction venture from the award-winning Chinese author of the brilliant alien-contact trilogy concluded with Death’s End (2016), whose readers, hopefully, learned to expect the unexpected.

As a boy, Chen—we’re offered no other name—watches in helpless horror as ball lightning engendered by a powerful electrical storm incinerates his parents. He dedicates his career to studying this baffling but well-attested natural phenomenon. His investigations take him to a remote mountaintop where he encounters Lin Yun, a young and extremely attractive army major obsessed with weaponizing such forces of nature as lightning. Encouraged by Lin’s enthusiasm and single-mindedness after years of futile theoretical modeling and pursuing dead ends, Chen glimpses the beginnings of a breakthrough, while his compulsive need for answers helps him suppress doubts about Lin’s ultimate goals. But neither Lin nor her superiors suffer from any such inhibitions, and they bring in Ding Yi, a brilliant physicist utterly indifferent to any real-world consequences his discoveries and conclusions might have. Fascinating conundrums and intriguing extrapolations abound—Liu demands a basic scientific literacy of his readers—but the story lacks the visceral tension, generated by the existential threat of hostile aliens, that gave the previous trilogy its edgy brilliance. What’s of greater import here is the way Liu’s approach differs from what we might expect. When, for instance, philosophical considerations arise, Liu tackles them head-on, as few English-language writers care to do. We might expect such a complementary pair of protagonists to become romantically involved—but no. When Liu writes of war breaking out, we would certainly ask why and against whom: questions that hold no interest for Liu, who declines to enlighten us. And what other writer would select a first-person narrator who later proceeds to write himself almost completely out of the narrative?

Consistently surprising and absorbing—just not for the usual reasons.