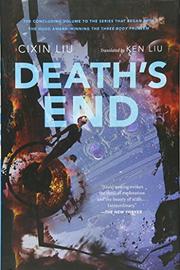 From the Remembrance of Earth's Past series, volume 3

What if alien civilizations do exist? In this final installment of a stunning and provocative trilogy (The Dark Forest, 2015, etc.), Liu teases out the grim, unsettling implications.

Previously, astronomer-turned-sociologist Luo Ji forestalled an invasion attempt by advanced aliens from planet Trisolaris. Luo’s “dark forest” deterrence works thus: if intelligent species exist, inevitably some will be hostile; therefore, safety lies in remaining hidden while threatening to reveal your enemy’s location to the predators. Earth knows where Trisolaris is, but the Trisolarans can’t threaten to reveal Earth’s location since they want to occupy it. Here, the story picks up at an earlier juncture. Cheng Xin, an aerospace engineer developing a probe to study the approaching Trisolaran fleet, learns that a friend has been tricked into volunteering to die in order to assist the project. Horrified, she retreats into hibernation. When she revives centuries later, dark forest deterrence holds the Trisolarans at bay. Luo, now old, hands Cheng the key to Earth’s defense. Unfortunately, the sophons—tiny, intelligent, light-speed computers sent by the Trisolarans as spies—know Cheng lacks Luo’s ruthlessness and immediately seize control of Earth; only by luck does Earth manage to trigger its deterrent. Hostile aliens immediately destroy planet Trisolaris, whose invasion fleet turns away because it’s only a matter of time before the same invisible antagonists deduce the existence of Earth and strike the solar system. Once again, Cheng must choose between logical ruthlessness and simple human compassion, with the fate of humanity at stake. This utterly absorbing book shows little interest in linear narrative or conventional character interactions. Instead, the author offers dilemmas moral, philosophical, and political; perspectives—a spectacular glimpse of three dimensions seen from a four-dimensional viewpoint; a dying universe shattered by billions of years of warfare; and persuasive ideas whose dismal repercussions extend beyond hope and despair into, inescapably, real-world significance.

Liu’s trilogy is the first major work of science fiction to come to the West out of China, and it’s a masterpiece.