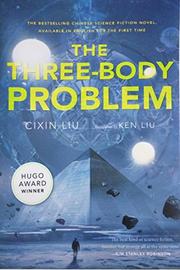 From the Remembrance of Earth's Past series, volume 1

Strange and fascinating alien-contact yarn, the first of a trilogy from China’s most celebrated science-fiction author.

In 1967, at the height of the Cultural Revolution, young physicist Ye Wenjie helplessly watches as fanatical Red Guards beat her father to death. She ends up in a remote re-education (i.e. forced labor) camp not far from an imposing, top secret military installation called Red Coast Base. Eventually, Ye comes to work at Red Coast as a lowly technician, but what really goes on there? Weapons research, certainly, but is it also listening for signals from space—maybe even signaling in return? Another thread picks up the story 40 years later, when nanomaterials researcher Wang Miao and thuggish but perceptive policeman Shi Qiang, summoned by a top-secret international (!) military commission, learn of a war so secret and mysterious that the military officers will give no details. Of more immediate concern is a series of inexplicable deaths, all prominent scientists, including the suicide of Yang Dong, the physicist daughter of Ye Wenjie; the scientists were involved with the shadowy group Frontiers of Science. Wang agrees to join the group and investigate and soon must confront events that seem to defy the laws of physics. He also logs on to a highly sophisticated virtual reality game called “Three Body,” set on a planet whose unpredictable and often deadly environment alternates between Stable times and Chaotic times. And he meets Ye Wenjie, rehabilitated and now a retired professor. Ye begins to tell Wang what happened more than 40 years ago. Jaw-dropping revelations build to a stunning conclusion. In concept and development, it resembles top-notch Arthur C. Clarke or Larry Niven but with a perspective—plots, mysteries, conspiracies, murders, revelations and all—embedded in a culture and politic dramatically unfamiliar to most readers in the West, conveniently illuminated with footnotes courtesy of translator Liu.

Remarkable, revelatory and not to be missed.