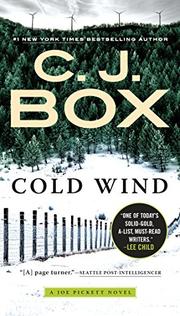 Earl Alden, the sixth suitor to take Missy Vankueren Longbrake Alden to the nuptial bed, was proud of the 100 new wind turbines sprouting on his spread, the Thunderbird Ranch. But someone must have disliked both them and him, because Joe finds his corpse chained to the vane of one of them, rotating briskly. Joe’s current nemesis, county sheriff Kyle McLanahan, and rookie county attorney Lisa Rich, announce that they’ve got an airtight case against Missy based on the testimony of an unnamed informant who maintains that she engaged him to kill the Earl of Lexington, who in a reversal of the customary order of things had been preparing to divorce her before she could tire of him. Joe, whose dislike of his overbearing, manipulative mother-in-law crystallized into something harder when she divorced rancher Bud Longbrake, confiscated his family’s property and left him empty-handed, finds himself in the unwelcome position of hunting for exculpatory evidence. He’d love to have the help of outlaw falconer Nate Romanowski once more. But Nate, following a serious quarrel with Joe (Nowhere to Run, 2010), has gone to ground somewhere he hopes will be safe from the old Special Forces colleagues he suspects have been sent to find and kill him. It looks like both men will be on their own until they collide just in time for a stunning courtroom finale.

Joe, who insists that “I’m not on a side,” spends more time than he’d like in rooms with ceilings, but the mystery is strong enough to compensate, and the revelations about wind farms will curl your hair no matter which side you’re on.