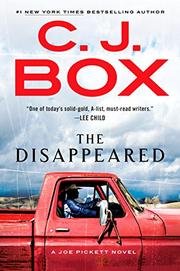 It’s not Gov. Colter Allen’s fault that high-profile British ad-agency CEO Kate Shelford-Longden disappeared somewhere between Silver Creek Ranch, the ultra-posh dude ranch where she’d just spent a week been pampered within an inch of her life, and the Denver airport several months ago. But his wife and other folks are leaning on him, so he leans on Joe (Vicious Circle, 2017, etc.) to drive the 300 miles to Saratoga in the depth of a January freeze and get the answers that have eluded Carbon County Sheriff Ron Neal and the Wyoming Department of Criminal Investigation. Bullied by the governor, Joe agrees to look into the case. Luckily, he has an in: His daughter, Sheridan, who’s been working at Silver Creek as a horse wrangler, got fairly close to the missing woman and knows all the ins and outs of the place. The staff at Silver Creek has been vetted more closely than most vice presidential candidates, but several contractors with access to the ranch seem suspicious enough to make likely suspects. Before Joe can make any real progress, though, the case notes he’s been given by Connor Hanlon, the governor’s dislikable chief of staff, are stolen, and his old friend Nate Romanowski, the “outlaw falconer” he’s been specifically ordered to keep away from, drops in to ask Joe a serious, albeit apparently unrelated, favor. The case turns out, rather disappointingly, to be two cases. But it’s a treat to see Joe’s daughter pulled into working with her father; there’s an unexpected role for his reptilian mother-in-law, the imperishable Missy Vankueren; a false lead he follows will have readers whooping with laughter; and both cases are wound up in highly satisfactory ways.

Best of all, the final pages find Box’s hard-used hero both triumphantly successful and in deep trouble once again in perhaps the most finely balanced conclusion in this rewarding series.