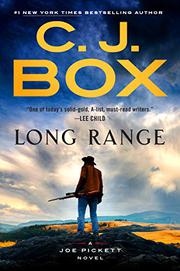 Once again, Wyoming game warden Joe Pickett gets mixed up in a killing whose principal suspect is his old friend Nate Romanowski, whose attempts to live off the grid keep breaking down in a series of felony charges.

If Judge Hewitt hadn’t bent over to pick up a spoon that had fallen from his dinner table, the sniper set up nearly a mile from his house in the gated community of the Eagle Mountain Club would have ended his life. As it was, the victim was Sue Hewitt, leaving the judge alive and free to rail and threaten anyone he suspected of the shooting. Incoming Twelve Sleep County Sheriff Brendan Kapelow’s interest in using the case to promote his political ambitions and the judge’s inability to see further than his nose make them the perfect targets for a frame-up of Nate, who just wants to be left alone in the middle of nowhere to train his falcons and help his bride, Liv Brannon, raise their baby, Kestrel. Nor are the sniper, the sheriff, and the judge Nate’s only enemies. Orlando Panfile has been sent to Wyoming by the Sinaloan drug cartel to avenge the deaths of the four assassins whose careers Nate and Joe ended last time out (Wolf Pack, 2019). So it’s up to Joe, with some timely data from his librarian wife, Marybeth, to hire a lawyer for Nate, make sure he doesn’t bust out of jail before his trial, identify the real sniper, who continues to take an active role in the proceedings, and somehow protect him from a killer who regards Nate’s arrest as an unwelcome complication. That’s quite a tall order for someone who can’t shoot straight, who keeps wrecking his state-issued vehicles, and whose appalling mother-in-law, Missy Vankeuren Hand, has returned from her latest European jaunt to suck up all the oxygen in Twelve Sleep County to hustle some illegal drugs for her cancer-stricken sixth husband. But fans of this outstanding series will know better than to place their money against Joe.

One protest from an outraged innocent says it all: “This is America. This is Wyoming.”