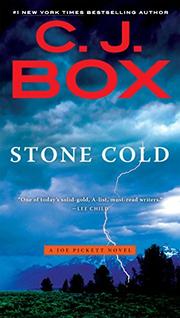 Joe Pickett’s fantastical 14th pits him against a nest of assassins that just happens to include his old pal Nate Romanowski.

Since Wyoming governor Spencer Rulon got Joe rehired at his old seniority level and with a new raise after he quit the Game and Fish Department after his last run-in with corrupt authority figures (Breaking Point, 2013), Joe’s seriously in his debt. So when Rulon sends him undercover to remote Medicine Wheel County to check out rumors that billionaire hedge fund founder Wolfgang Templeton, who’s retired to Sand Creek Ranch, is heading a murder-for-hire ring whose soldiers seem to include Nate, Joe agrees to go despite his reluctance to leave his family yet again. Nor is he crazy about the cover story that he’s just bringing Medicine Wheel County Game and Fish Warden Jim Latta some pheasants to release into the wild and helping Latta get Templeton’s permission to establish several public walk-in areas in Sand Creek. No sooner has Joe met Templeton and peddled his cover story than he realizes that Sheriff R. C. Mead, Judge Ethan Bartholomew and Latta himself are all protecting poachers like Bill Critchfield and Gene Smith. As the killers continue to take out richly deserving targets—“Go do some good” is their mantra—Joe effortlessly finds ways to get under Latta’s and Templeton’s skin and then struggles to reap the whirlwind. Meanwhile, Joe’s ward, April, takes up with a possible rapist, and his older daughter Sheridan wonders if a creepy loner in her dorm is about to shoot up her campus.

Suspenseful yet routine, with oversized bogeymen who seem more menacing than they really are, ethical dilemmas that dissolve under pressure and an ending that tests your tolerance for coincidence. Below average for this splendid yet checkered series.