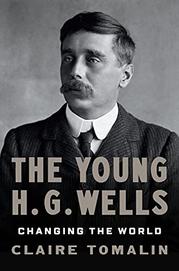 The acclaimed literary biographer delivers a compelling portrait of the formative years of the iconic British author.

Tomalin chronicles the early life of H.G. Wells (1866-1946), who drew on his scientific knowledge and prophetic vision to write some of the most thrilling books of his era. Tomalin paints a picture of a young man desperate and determined to succeed. His family endured genteel poverty, and his mother, a housekeeper, determined that his best shot at success was to apprentice as a draper. Fortunately for future readers, Wells hated the position and “made up his mind to behave badly.” While teaching at a boarding school, he was beaten severely in a rugby game and might have died had his resourceful mother not nursed him back to health at the estate where she worked—and where the convalescing young man absorbed the estate’s magnificent library. From there, a series of lucky breaks propelled Wells to fame and eventual fortune. He won a fellowship to study under Thomas Huxley, foremost English scientist of the age, and his scientific grounding became the eventual foundation for his early novels: The Time Machine, The Island of Doctor Moreau, The War of the Worlds. Wells accurately predicted cross-channel air travel, tank warfare, and aerial bombings. His fiction, writes Tomalin, “reads like reporting of things seen touched and heard.” Wells was a renegade, which enlivens the already engaging narrative. An ardent believer in free love, he pursued multiple extramarital affairs, the most notorious of which was a liaison with the daughter of close friends that produced a child. Tomalin covers her subject’s many shortcomings, but she has an empathy for him and a deep understanding of a young man impelled to reach for everything within his grasp. She ends her story with Wells in his early 40s, noting that she was reluctant to part company with this complicated genius. Readers of this excellent biography will agree.

A vivid portrait of the early years of an author of astounding vision, who predicted many of the horrors of the 20th century.