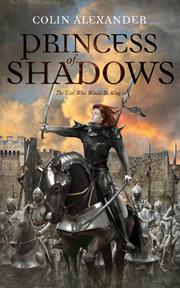 The Girl Who Would Be King

Gimlé is an island realm divided into regions of varying light. Arthur, King of the Light, Shadows, and Dark, rules from Triad Castle. He enforces the Code, laws written by Arthur the Hammer six generations ago. With Queen Sophia, his children are 10-year-old Aemond and 6-year-old Aeryn. When an upstart named Grayson begins preaching against the Code and inspiring rebels to pillage the realm, Arthur and his adviser Robert Darnald summon nearly 1,000 men from among loyal lands to stop the rebellion. Arthur’s force squashes the opposition, but a leading traitor named Murat escapes. Later, at a Council meeting of lords, Dux Bogdan Keseljevic says the Code is antiquated. He begins scheming for the throne, drawing Arthur once more into battle at the Citadel of Eternal Light. Upon Arthur’s battlefield death, Keseljevic becomes regent and demands that Sophia turn over the children. The royal family flees Triad, but only Aeryn escapes captivity. She reunites with Robert, vowing revenge against those who took her family. Growing up in the Shadows, Aeryn learns sword fighting and becomes a fearsome young woman. She forms lifelong friendships with Dux Chandrasejhar’s son, Rishi, and her companion Robyn Nakagawa. Unfortunately, Aeryn makes fresh enemies, too. Alexander’s engrossing novel is steeped in detailed medieval politics and battlefield tactics. The most prominent fantasy element is Gimlé’s strange, fixed relationship to the Eye—the planet’s star—which causes plants to move, “not with the wind, but so as to have the light of the Eye fall on the leaf.” The battles are depicted with vibrant gore, as in the line “Arthur’s next cut took off the arm that had been holding the shield.” But they do highlight Aeryn’s absence from much of the narrative’s first quarter. Though willful and imaginative, the protagonist is easily lost in the sprawling medieval panorama. Killing eventually becomes Aeryn’s signature talent as she seeks vengeance and possibly a new life. While the tale offers a rousing finale, it slights powerful queens throughout both fiction and history.

A vivid, engaging, if bulky fantasy in which violence carries the day.