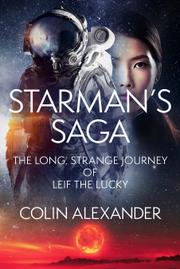 The Long, Strange Journey of Leif the Lucky

An American on humanity’s first voyage to another star system discovers peril, romance, and considerable mayhem on the contentious project.

It’s 2069 in Alexander’s (My Life, 2019, etc.) SF novel, and Leif Grettison is a Florida-based veteran who survived “the Troubles,” a Russian-Sino-United States war that scarred the mid-21st century. Now he’s a brainy graduate student with a girlfriend and an EMT job, neither valuing him very highly. Leif impulsively enters a high-profile lottery to select a civilian to go into hibernation for dozens of years at a time on the “starshot,” humanity’s first deep-space exploratory voyage (via a ramjet craft) to another, presumably habitable system, not returning home for nearly 30 years. To his surprise, Leif is told he is the winner—after a front-runner drops out. Leif is disturbed to find that the carefully selected 33-person multinational crew includes bellicose Russians and haughty Chinese still holding childish grudges. In fact, the entire project is largely propaganda, a NASA/International Space Commission gambit to make the world’s superpowers cooperate and expend their energies on a work of pure science rather than trying to kill one another over influence and territory. Leif realizes his own windfall as a token Everyman onboard was no random selection but a calculated move to place a former American soldier amid the team of squabbling, nationalistic scientists in case trouble develops. And trouble sure does. This maiden-voyage setup is a recognizable one, and it’s no secret from the start that Leif will find romance with the bunkmate who despises him the most: a laser-eyed, razor-cheekboned female Chinese pilot (who actually flew against his squad in combat). Still, the author skillfully steers the story. Alexander creates a good number of memorable jeopardy-in-space situations requiring steady nerves and know-how, and he evokes a nicely thought-out alien environment. The author even takes the story past the point where other writers might have pulled the curtain to ruminate on human society’s arbitrary evolutions and political-correctness pettiness (“snowflake” is a term used often here) and how being in suspended animation for long intervals doesn’t help. An opening prologue casting the tale as some sort of neo-Icelandic saga (paying tribute to Leif’s Nordic heritage), written in archaic language, is cute but, unlike the other rich material here, doesn’t really pay off.