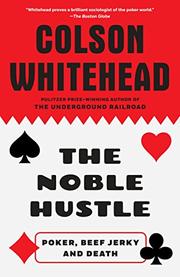 An assignment to compete in the World Series of Poker allows the author to meditate on his identity, failings, writing, appetite for beef jerky and challenge to make the leap from decent house player to high-stakes pro gambler.

As a novelist of considerable range, Whitehead consistently writes about more than he’s ostensibly writing about, turning a futuristic zombie novel (Zone One, 2010, etc.) into a parable of contemporary New York and here writing a poker book that should strike a responsive literary chord with some who know nothing about the game, though for those who want to read a poker book, much of this contextual elaboration might feel like padding. It begins with a definition of “anhedonia: the inability to experience pleasure,” preceding the first chapter, “The Republic of Anhedonia,” of which the author proclaims himself a citizen and representative. The first sentence: “I have a good poker face because I am half dead inside.” He also has an ex-wife, a young daughter, a weekly poker game and an assignment from Grantland to cover the World Series of Poker in Las Vegas as a participant. Even the assignment is something of a gamble—his freelance payment is the entrance fee, and whatever he wins (or, presumably generates in subsequent book royalties), he keeps. But if he loses, as odds are he will, he gets nothing but memories and experience for the article he must write. As he writes of warm-up sessions in Atlantic City, training with his “Coach,” competing with more experienced players in Vegas, he sometimes seems to be trying too hard—“Pick your fights like you pick your nose: with complete awareness of where you are”—while drawing parallels between poker and writing (“We were all making up stories, weaving narratives”). Since his narrative doesn’t proceed chronologically to a natural climax, he jumps around a bit with time.

A minor work by a major novelist, a busman’s holiday, but engaging in its color and character.