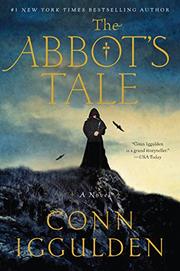 A 10th-century English abbot tells of his service to seven kings—a story of pride, vengeance, and blood—in a tale abounding with real historical characters.

In 934 C.E., 15-year-old Dunstan of Glastonbury pulls his would-be killer down a cliff and lands on top of him. Only Dunstan survives. “It seems a man can fall a long, long way and live,” he writes, “if he lands on a priest.” His father had taken him and his brother, Wulfric, to an abbey to turn them into men. He’s a highly intelligent lad who has a knack for making dangerous enemies and valuable friends. One day, he descends slowly from a tower scaffold using pulleys and counterweights. A witness believes Dunstan has been carried to safety by an angel. Dunstan confirms the lie and adds that he’d had a vision of a grand cathedral. King Æthelstan believes the miracle of Dunstan and the angel and later makes him Abbot of Glastonbury. Lady Elflaed promises to finance the abbey of Dunstan’s vision. Meanwhile he wants to marry a girl, but he’s persuaded instead to take an oath as a Benedictine monk. The girl had given him a venereal disease, anyway. Dunstan eventually becomes a “humble abbot” whose head is stuffed with pride and ambition. After King Æthelstan dies, Dunstan writes he “was a great man, but he failed to see the worth in me. It follows that he was not without flaw then.” Dunstan tells a grand, lifetime-spanning tale filled with treachery and the deaths of kings—“no man lives forever,” he writes, “not even a king. Especially a king.” And it’s about war, “the great engine of storytelling.” Dunstan admits vile acts to the reader, such as ripping off a blackmailer’s nose with red-hot tongs and letting people believe he’d done it to the devil, a legend still ascribed to him.

Fans of the genre will love this masterpiece of historical fiction.