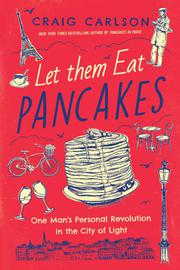 One Man's Personal Revolution in the City of Light

More tales from the owner of the Breakfast in America diners in France.

In this follow-up to Pancakes in Paris, Carlson shares more intimate and engaging stories of how he fell in love with France and a Frenchman while running his well-known diners. Although he starts out slowly, reminiscing about his childhood, the author quickly ups the tempo as he regales readers with the comical story of Pigeon Man, an older gentleman who insisted on feeding hundreds of pigeons in front of Carlson’s building. In addition to describing the physical mess the birds created, the author discusses the bureaucratic red tape he had to cut through to get the Pigeon Man to move. Carlson then shares memories of how he learned French and gives readers advice on how to learn the language more efficiently than he did (the text features French words and phrases sprinkled throughout). As a business owner, Carlson spends a good portion of the text discussing the ways in which French employers differ from Americans when it comes to their employees, from providing far more vacation time and maternity/paternity leave to the near impossibility of firing someone even due to poor performance. The author ponders the French fondness for smoking and the love locks placed by tourists on the bridges in Paris, and he explains the importance of Thanksgiving to him, which motived him to provide Thanksgiving dinner for more than 100 people. “Every year,” he writes, “BIA was featured in magazines and social media as one of the places in the world where Americans could celebrate Turkey Day abroad….For me, what I loved most about the holiday was its simplicity; just dining and drinking with loved ones for hours on end.” Of course, Carlson explores both French and American food, whether cooked at his diner, at a high-end French restaurant, or by his mother-in-law.

A pleasant, witty memoir from an American diner owner in France.