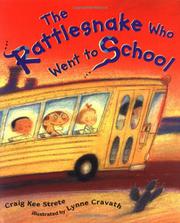 THE RATTLESNAKE WHO WENT TO SCHOOL

Any child who has faced a scary new situation will understand why Crowboy, presumably a Native American boy from the Southwest, adopts a rattlesnake persona on the first day of school. If he’s a mean old rattlesnake, who would hurt him? So transformed, he slithers onto the bus and coils up under the desk in class: “But the teacher said, ‘Don’t worry, Crowboy. You’ll make friends.’ ” He’s skeptical, but there is one girl who doesn’t seem to be put off by the whole “snake thing.” In fact, she wants to slither right along with him! Strete’s story illustrates how completely the boy withdraws into his fantasy self, so it’s perfect that Cravath’s stylized, wonderfully vivacious, desert-hued, chalky illustrations depict Crowboy as an actual, albeit endearingly anthropomorphized, rattlesnake. Children will giggle as the boy-snake licks the bus window and refuses to eat hot dogs—and will cheer to see that by the end, Crowboy retracts his snaky fangs, literally and figuratively. An original, funny, non-preachy spin on the “bullies just want a friend” theme. (Picture book. 4-8)