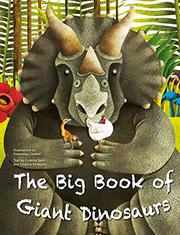 A separate small hardcover volume about small dinosaurs nestles in the front cover of a much, much larger album of their humongous cousins.

Each part of this Italian import features 18 spread-filling dinosaurs in side views, tricked out by Cosanti in loud, saturated colors or patterns and posed for scale with a remarkably calm white chicken against the same tropical backdrop. The effect is a bit surreal, as the dinos and the prehistoric foliage have the thick, rounded look and fuzzy surfaces of stuffed toys, but the weight and bulk of the looming creatures in the superoversized volume—and the lithe grace of most of their often feathered smaller relatives in the diminutive one—do come through vividly enough to make strong impressions on viewers. Each portrait comes with an identifying label and a descriptive comment. Along with being admittedly speculative, several of the latter are afflicted with translation issues. Still, even expert dinophiles are likely to find mixed in with the usual suspects a surprising number of unfamiliar species, such as Magnapaulia, Therizinosaurus, and Parvicursor. In like packaging, The Big Book of Giant Sea Creatures and the Small Book of Tiny Sea Creatures portrays in the two parts 36 brightly hued, often exotic saltwater denizens, from the ½-inch anemone shrimp to 110-foot blue whale and 130-foot giant siphonophore. An intrepid clownfish (sometimes, understandably, hard to spot) provides a sense of scale in each portrait, and accompanying comments offer notes on sizes, habitats, and like helpful points.