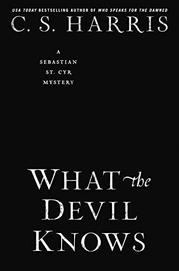 WHAT THE DEVIL KNOWS

An aristocrat investigates a murder at the opposite end of British society.

Bow Street Magistrate Sir Henry Lovejoy asks Sebastian St. Cyr and his wife, Hero, no strangers to murder, for help in a dangerous and politically sensitive case: the murder of Magistrate Sir Edwin Pym. Three years after the notorious 1811 Ratcliffe Highway killings, Pym has been brutally murdered in the same way, his head bashed in and his throat cut. Although a suspect to the earlier killings was duly arrested and hanged himself in prison, this latest outrage indicates that either the authorities had the wrong man or there’s a copycat at work. Sebastian—who's the son-in-law of the powerful Lord Jarvis and heir to a dukedom despite not being the natural son of the duke—doesn’t know who his real father is and is desperate to track down the mother who deserted him, recently spotted on the continent. When more killings follow, Sebastian seeks and finds connections between sailors and the owners of public houses in the rough area near the docks. He’s shocked by the depth of depravity the wealthy will sink to in order to enhance their fortunes. Convinced that the suspect who killed himself was innocent, he labors to connect the murders, many of which may have been committed to cover up the original crimes, searching for a motive while narrowly escaping several attempts on his own life.

An intricate puzzle, based on a series of real-life murders, that indicts social injustices that continue to this day.