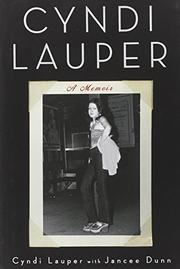 by Cyndi Lauper with Jancee Dunn

With the assistance of Dunn (Why Is My Mother Getting a Tattoo?: And Other Questions I Wish I Never Had to Ask, 2009, etc.), Lauper tells her alternately harrowing, hopeful and hilarious life story.

The author left her home in Ozone Park, Queens, at age 17 to escape a sexually abusive stepfather and the limitations on life—especially for women—imposed by a hardscrabble working-class neighborhood and male-dominated family culture. “As a kid,” she writes, “I heard a lot of sad stories about women.” What followed was years of marginal existence, odd jobs (including a stint as a topless dancer) and very little money. Her life change in 1983, however, with the release of She’s So Unusual, which garnered four top-five hits and made Lauper an instant star. Other hits followed, including the anthemic True Colors (1986). Inevitably, her superstar aura faded, but her eclectic musical output did not. Throughout, she struggled to remain true to her artistic values. In the music industry, she was “surrounded by men,” most of whom were “trying to remake me…and I didn’t want to be remade.” Regardless, Lauper continued to release significant albums, ranging from pop to club music to standards to blues, all of it infused with her own musical vision and a penchant both for remembering the flawed beauty of Ozone Park (“I always felt I could find Shakespeare right in my neighborhood”) and a determined identification with outsiders—especially women and members of the GLBT community. This identification turned into activism as her True Colors Foundation has worked to help and protect GLBT youth and promote tolerance. Though not as literary, Lauper’s story echoes the hopes of a struggling artist portrayed in Patti Smith’s Just Kids.

A moving story of an American musical original.