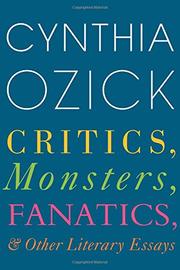 A veteran and venerated literary essayist, critic, and novelist collects some recent (some previously unpublished) reviews and essays.

For each of the terms in her title, Ozick (Foreign Bodies, 2010, etc.), a winner of the National Book Critics Circle Award, offers a brief essay of explanation and even elaboration, and throughout, she delights with her almost Emersonian aphorisms. In her section on “Monsters,” for example, which deals with the oddness of writers, she writes (alluding to Flaubert) that she will be considering “the condition of the writer as a deformed outlier.” Virtually every page of this strong collection features something memorable, and several significant figures appear more than once, mostly writers and fellow critics whom she admires: Kafka, Harold Bloom, Saul Bellow, and William Gass (whose sentences “are most exhilaratingly ingenious when they venture into unexpected and dizzying keys, diving from vernacular directness into an atonal Niagaran deluge”), among others. Ozick also deals with some key issues in the literary world—the difficulties of translation, the differences between a critic and a reviewer (she places herself firmly among the former and goes off on what she sees as facile and ignorant “reviews” posted on Amazon and on other sites—and notes with sadness how quickly literary figures pass away from the public mind when they die. More than once, she mentions Norman Mailer as a case in point. She doesn’t think Bellow has suffered such a fate, but this may be more her wish than a fact. Ozick’s pieces are also rigorously intellectual. Readers will need some patience and considerable knowledge to keep up with her in her essays about Kafka and Auden and Gass.

Often intricate and lovely leaves from the author’s literary tree.