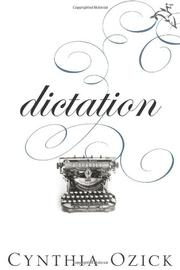 Deceptions and obsessions drive this elegant collection of four stories, three of which have been published in magazines.

The fitful friendship of Henry James and Joseph Conrad is the context for the title story, previously unpublished. Their hands cramping, James and Conrad have been forced to dictate their work to stenographers. The stenographers, Theodora Bosanquet (employed by James) and Lilian Hallowes (employed by Conrad), meet by chance at a London club one day in 1910. Theodora, the aggressive one, suggests tea before introducing a bold scheme. Uncommonly well plumped out, the story is a literary jape with a revenge element. Revenge also figures in the contemporary “Actors.” Matt Sorley is an elderly New York actor portraying a latter-day Lear in a play. Over the course of the story, he is humiliatingly upstaged by an obsessed figure. “At Fumicaro” is a complete change of pace. Another New Yorker, 35-year-old Frank Castle, bachelor, well-known critic and ardent Catholic, travels to Mussolini’s Italy for a conference near Lake Como, and on his fourth day marries a chambermaid. We learn of the marriage upfront; Ozick (Heir to the Glimmering World, 2004, etc.) uses her storyteller’s magic to keep us guessing how this “inflamed” bachelor will manage his passion. The last story, “What Happened to the Baby?,” is the best, an intricately plotted portrait of a Depression-era married couple in the Bronx who are engaged in a bitter marital struggle.

Playful, teasing, provocative fare from this most accomplished of ironists.