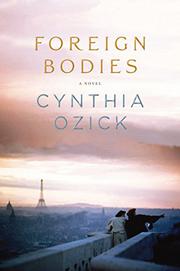 An extraordinary novel, loosely based on The Ambassadors—but Ozick (Dictation, 2008, etc.) manages to out-James the master himself.

Julian Nachtigall, son of a tyrannical and imperious businessman, has gone to Paris but has shown no interest in returning home. While there, he links up with Lili, a Romanian expat about ten years his senior. Marvin, the father, is furious that Julian wants to waste his life playing around in nonserious matters (e.g., writing essays and observations of French life), so he sends his sister Bea (who’s Anglicized her name to Nightingale) to Paris to bring him to his senses as well as bring him home. Bea teaches English to high-school thugs who mock her love of Wordsworth and Keats, and Marvin has always held her in contempt for what in his eyes is her impractical and useless profession. Bea is complicit in tricking Marvin by sending Julian’s sister, Iris, to Paris instead. Iris is the apple of Marvin’s eye, a graduate student in chemistry and a promising scientist—in other words, all that Julian is not. But unbeknownst to Marvin, Iris is also happy to escape the imperatives of her authoritarian and oppressive father, so she goes to Paris more in the belief that she will stay there rather than bring her brother back home to California. Through flashbacks we learn of Bea’s unhappy and brief marriage to Leo Coopersmith, a composer who has pretensions of being the next Mahler, though he winds up something of a Hollywood hack, composing music for cartoons. We also meet Marvin’s long-suffering and brow-beaten wife, Margaret, whose neurasthenia is directly attributable to her husband’s iron-fisted despotism. Ozick brilliantly weaves together the multiple strands of her narrative through letters, flashbacks and Jamesian observations of social behavior.

This is superb, dazzling fiction. Ozick richly observes and lovingly crafts each character, and every sentence is a tribute to her masterful command of language.