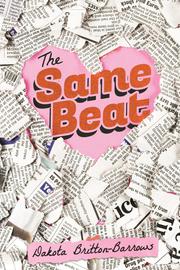 From the West 44 YA Verse series

In this novel in verse, a teen girl finds herself at journalism camp in the city.

The summer before senior year, Teegan is devastated when she discovers her best friend, Maria, is going on a road trip to look at colleges without her. Used to following in Maria’s shadow, shy Teegan realizes she needs to pursue her own dreams, and her parents plan for her to spend two months at journalism camp in New York City. At camp, she’s partnered up with Marcy: They’ll be assigned a new beat each week to cover, writing stories that culminate in a newspaper final project at the end of the summer. Teegan is wowed by bold recent high school graduate Marcy, who introduces herself as bisexual and explains that she plans to go backpacking through Europe when camp is over instead of to college. As the summer passes, Teegan comes out of her shell and realizes she’s attracted to Marcy—but what will happen to their relationship when the summer’s over? Even though the sparse verse stays close to Teegan’s emotional first-person perspective, the character growth and romance feel sudden since, unfortunately, the adventures in New York City happen mostly off the page. The sweet discovery of sexuality redeems this otherwise ordinary story. Despite the diverse urban setting, characters default to White.

A solid but unexceptional coming-of-age story for reluctant teen readers.