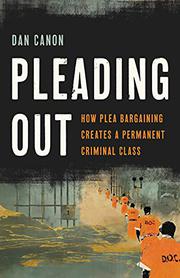 A full-throated denunciation of a judicial system grown lazy, complacent, and overly given to forcing confessions for its own convenience.

Civil rights attorney Canon, whose legal work helped secure nationwide marriage equality, argues that the plea-bargaining system on which courts rely originally served the ruling class by “dividing up America’s ever-growing working class before it got big enough to take over.” He opens with a 1972 case in which a Kentuckian caught up in a check-kiting scheme in the amount of $88.30 insisted on his innocence and rejected the prosecution’s offer of a five-year prison sentence without trial. That refusal earned him a life sentence, according to a statute that allows the prosecution to seek maximal penalties for the recalcitrant. Small wonder that so many accused Americans take plea deals, “a quotidian injustice that most of the public doesn’t know or care much about.” This injustice, Canon insists, is a feature and not a bug of a legal system that would otherwise have to bring cases to trial, which, he argues, would not be a bad thing, since it would force prosecutors to actually prove guilt before a jury. Of course, as the author also shows, the jury system is fundamentally flawed since it penalizes workers whose employers don’t make allowances for public service—workers who are mostly minority and working-class, which explains the overwhelming Whiteness of juries. Canon incisively demonstrates how the rise of plea bargaining is a way for prosecutors to decrease their workloads. “Expediency, not fairness, is the principal concern,” he writes. Since plea bargains usually carry mandatory jail time, the ploy explains why our population of the imprisoned and the criminal class is so much higher than that of other nations. There are cures, Canon argues at the end of his well-reasoned argument. For one, “prosecutors can voluntarily screen cases to streamline the docket rather than just scramble to resolve a high volume of cases in a short amount of time.”

A compelling document of interest to anyone concerned with civil rights and an equitable system of justice.