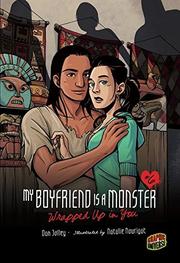 WRAPPED UP IN YOU

From the My Boyfriend Is a Monster series, volume 6

When a weird midnight rite in a museum brings a hunky Incan mummy back to life, teenage Staci has a decision to make.

Tall, dark, chiseled and gifted with magical powers to boot, the stranger who introduces himself as Pachacutec, or "Chuck," puts Staci on the horns of a dilemma: Though they have instantly and thoroughly clicked, even he admits that his reanimation is dangerous and unnatural. Furthermore, Staci has a set of erstwhile friends who have been dabbling in magic, and they are so eager to drain the Incan prince of power that they've put a vicious hex on Staci to pressure her into betraying him. Even minor figures are distinguishable characters in Nourigat's monotone ink-and-wash art, and both their emotional tides and the increasingly suspenseful dramatic action are ably conveyed in the small but clear panels. The climactic face-off takes place in the can't-miss setting of an after-hours fair and leaves the would-be witches thoroughly chastened and Chuck still around for romance—plus, there's a closing "interview" in which he reveals that he's actually based on a historical figure.

True to this series' winning formula, an enjoyable mix of terror, comedy and romance.