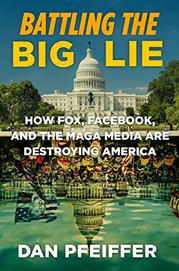 How Fox, Facebook, and the MAGA Media Are Destroying America

The co-host of Pod Save America examines the sweeping disinformation practices of Republicans and their media allies.

“If Democrats and the media do not fight back against the right-wing media machine bent on division and destruction, democracy has no chance of surviving,” writes Pfeiffer, who served as a senior adviser to Barack Obama during his second term. Hard words, but hardly alarmist given the evidence the author assembles. Though many believe this disinformation machine is a recent development, Pfeiffer recounts a smear campaign from 2004 mounted against South Dakota Sen. Tom Daschle, in which the GOP falsely claimed that Daschle had promised to return the Black Hills to the Sioux Nation if Sioux leaders delivered the votes necessary for him to win the election. Daschle narrowly lost, forcing Pfeiffer to rethink the conventional rules—e.g., don’t feed the beast by dignifying lies with a response. The author argues convincingly that the biggest beast is Fox and Friends, which “has all the accoutrements of a typical news program while being a right-wing clown show.” Fox News, he writes, is a wholly partisan wing of the Republican Party. “And here’s the most disturbing thing: there is a market for ‘crazier than Fox.’ These networks were able to siphon off some of Fox’s audience, and now they are in a race to the bottom,” writes the author. Pfeiffer is a master of cutting derogation: “Arkansas senator Tom Cotton makes Jared Kushner look like a magnetic personality”; “[Jerome] Corsi is a well-known nutcase and a shitty writer, but when your campaign is trying to elect a Black man with the middle name ‘Hussein,’ no threat can be ignored.” He proposes a recalibrated journalism to counter the Republican machine, with plank points such as “Build Immunity to the Big Lie” and “Build Trust,” but whose overarching, sensible argument is to abandon the pretense of balance in favor of “a progressive propaganda operation that can go toe-to-toe with the Right.”

A new playbook for Democratic messaging with a bite and a sting.