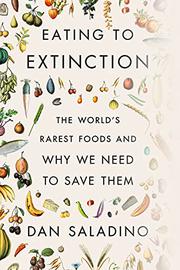 The World's Rarest Foods and Why We Need To Save Them

Fascinating descriptions of Indigenous and mostly disappearing foods, plus an alarming message.

Veteran BBC food journalist Saladino emphasizes that world food production exploded after World War II when scientists produced superproductive grains, plants, and livestock. Though these developments drastically reduced famine, the mechanics involved require enormous inputs of chemicals, fertilizer, and water. Relying on elite, high-yield species eliminated those that didn’t measure up, diminishing their diversity. Today, rice, wheat, and corn provide half of all human calories. Most global pork comes from a single breed of pig, and more than 95% of U.S. dairy cows are a single breed, the Holstein. Limiting food diversity has been enormously profitable for large corporations, but the future consequences make scientists uneasy. “We are living and eating our way through one big unparalleled experiment,” writes the author. Having defined the problem, Saladino chronicles his travels around the world, describing dozens of vanishing edibles and pausing regularly to deliver the history of the major foods and food production. Readers will be intrigued and educated by his interviews with experts who warn of our disastrous dependence on a shrinking number of standardized foods. Commercial barley can’t survive in the cold, infertile islands north of Scotland, but its ancestral variety does fine. Although nearing extinction in the wild, Atlantic salmon is a familiar food item because almost all of them are farm raised. Bred to be faster growing and meatier, they have become a bland domestic food animal no less than the chicken or cow. Though there are more than 1,500 varieties of banana, most markets are dominated by the Cavendish, a cloned fruit grown in immense monocultures visible by satellite. Being genetically identical, they can’t evolve and so can’t develop resistance to disease, which inevitably spreads like wildfire. One specific disease is currently devastating the Cavendish, but scientists are working to edit the plant’s DNA “to find a fix against the disease.”

A delightful exploration of traditional foods as well as a grim warning that we are farming on borrowed time.