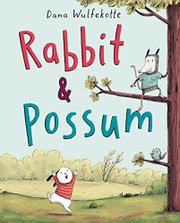 Energetic Rabbit invites her friend Possum for a snack but must first figure out a way to help him climb down from a high tree branch.

When Possum hears rustling in the bushes, he assumes a monster is close by and, frightened, scampers up a tree—only to realize later that he cannot get down. Good friend Rabbit tries unsuccessfully to climb the tree and then thinks of various implausible ways to rescue her friend. One includes building a ladder that, humorously, is too short, effectively depicted in a well-composed double-page spread. Finally Rabbit decides to ask the “monster” (really a moose with very large antlers) for help but must first convince Possum to quell his fear. Later relieved to learn that Moose is a vegetarian and not a possum-eating monster, Possum is still not ready to repeat the whole experience when, after a snack of lettuce sandwiches and carrots, he reacts with an anxious “NO!” to Rabbit’s suggestion, “Let’s climb another tree!” Simple, cartoon-style digitally colored pencil drawings fill in the story’s narration with illustrated thought bubbles reflecting Rabbit’s ideas for rescue. Looking closely, readers can surmise who the “monster” is from Moose’s various hidden poses in the backgrounds of each scene. At the same time the storyline is enhanced with well-integrated dialogue balloons highlighting both problem and solution from each character’s perspective.

Friendship, loyalty, and determination come through in this well-paced exploit.