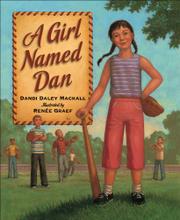 A girl named Dandi daydreams about baseball and loves to play. She even submits a 50-word essay to the Kansas City A’s on why she wants to be a batboy, signing it “Dan.” Although she wins, she can’t accept, because—like Little League at the time (1961)—girls are not allowed. In her disappointment, she takes out her frustration by forcing herself into the boys’ game and hitting a home run—and by switching her allegiance to the Cardinals. Dandi narrates her own tale, spinning out her grasp of the game with sprinkles of baseball lingo. Graef’s static images set in flat landscapes and interiors do nothing to enliven the prosaic text: Dandi’s pigtails seem stolid even when flying in the wind. A note on the flap states that the story comes from the author’s own attempt to win the batboy contest, but this tie to reality doesn’t make up for the lack of spirit and energy. (Picture book. 7-9)