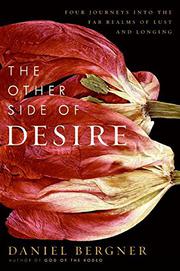 THE OTHER SIDE OF DESIRE

Four Journeys into the Far Realms of Lust and Longing

New York Times Magazine staff writer Bergner (In the Land of Magic Soldiers: A Story of White and Black in West Africa, 2003, etc.) follows four people into areas of rarefied longing where few dare or desire to go.

The author eschews passing judgment—not so easy while watching a woman whip someone bound to a chair—but doesn't switch off his journalistic instincts. In carefully etched prose, Bergner unpacks the tightly twisted roots of desire, power seeking, self-hatred and theatricality that motivate his four pseudonymous subjects. The first chapter concerns Jacob, whose desires are focused entirely on women’s feet. This well-behaved married salesman is “mortified” by his preference, which he would much rather do without. Unlike the self-flagellating Jacob, the Baroness is entirely at ease in her basement dungeon, “a place of pleasure, of lashing, burning, beating, cutting, gagging, branding.” She’s an uncommon creature; true female sadists are very rare, and most dominatrixes are simply specialized prostitutes. Resplendent among her submissives, she finds laughable the idea of a safe world without masters and slaves. Readers will be most disturbed by Roy, a likable computer technician who is also a child molester. Yet this chapter is extremely interesting, as Bergner tries to ferret out the seeds of Roy’s affliction. He dissects a range of possible reasons and cures with much insight, but offers little in the way of easy answers. The last chapter, concerning men sexually attracted to women who are missing limbs, is the most emotional. Bypassing the expected curiosity over the root of these men’s desires, Bergner looks intently at the more common disgust with the physically maimed. Even amputees’ friends and family often make them feel less than human, he notes; at least those who want them for their wounds treat them as wholly desirable.