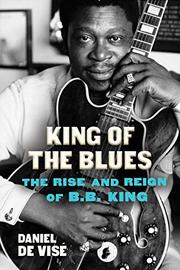 KING OF THE BLUES

The Rise and Reign of B.B. King

As blues royalty and one of the 20th century’s most influential musicians, B.B. King (1925-2015) has long deserved a well-considered biography that places his achievements in a cultural and historical context. This is it.

Pulitzer Prize–winning journalist de Visé deftly interweaves tales of American history, pop culture, racial relations, music theory, and much more to fully demonstrate King’s significance. Not only does the author show King at his highest moments—winning multiple Grammys and the Presidential Medal of Freedom, recording his most-acclaimed albums, opening the B.B. King Museum and Delta Interpretive Center in his hometown of Indianola, Mississippi—but also his lowest, including his final days, when he was bedridden and suffering from complications of his chronic diabetes. It’s a magnificent tale that de Visé reconstructs mostly in King’s own words, culled from his memoir and the hundreds of interviews he gave throughout his career. However, it is often when the author writes as an outsider about King’s life that the most poignant revelations come. Though King famously cultivated the belief that he had fathered 15 children, he was believed to be sterile. Almost as famously, King would rarely address racial injustice even though it affected him and his career deeply. De Visé, who lays out one indignity after another for King and his band because they were Black, wonders if “King’s anger remained deep inside, concealed behind the expressive eyes and the ancient stutter, where perhaps it had always lived.” As King himself once wrote, “Moving on is my method of healing my hurt and, man, I’ve been moving on all my life.” What de Visé does best, though, is assess the musical magic that King and his beloved guitar, Lucille, made and how their unique sound combination influenced blues and rock stars for generations.

The thrill is here, as B.B. King finally gets his due in this first meticulous account of his historic life.