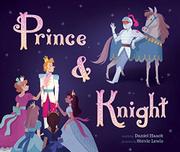 From the Prince & Knight series, volume 1

A prince of marriageable age looks far and wide for a partner who sings the same tune.

“Handsome and sincere,” the prince accompanies his parents to meet ladies from nearby kingdoms. While the royals are away, a fire-breathing dragon ravages their home kingdom. The prince races home to protect his realm only to find a knight in shining armor battling alongside him. The two work together to defeat the dragon, but in the process, the prince loses his grip and nearly falls to his doom. The visored knight sweeps in to catch the prince, takes off his helmet to reveal his identity, and the two instantly realize their connection. Villagers and royals alike cheer for the two men’s relationship and, soon, wedding. Lewis’ lush colors and dramatic sequencing clearly show her background in animation and lend a timeless, Disney-like quality to the story. The art notably does not shy away from depicting the intimacy between the men, keeping it on par with images of heterosexual relationships that already dominate children’s media. Though the royal family is white, the happy villagers and the prince’s new betrothed add some necessary racial diversity to the mix.

Victorious—it may even usurp King & King (2001) as the premier queer-friendly fairy tale for this age set.