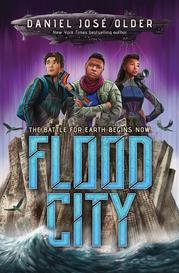 Two siblings must defend the last surviving city on Earth.

Decades ago, humanity was divided into two groups: those who inhabit Flood City—like Max and Yala Salazar—and the Chemical Barons, who ruled over Earth but took off into space when it was devastated by the Floods. Now, the Chemical Barons want to return to Earth, and Mephim, an ArchBaron in the Chemical Dynasty, has a nefarious plan to achieve this. But, when Ato, a young Baron in training, discovers the truth behind a routine reconnaissance mission, he questions his loyalties in the battle between the Barons, the Earthlings, and the Star Guard Conglomerate, peacekeepers and providers of food rations for the people of Flood City. Back on Earth, Yala secretly wants to join the Star Guard and help fight the Chemical Barons even if she doesn’t agree with everything they do—and when the Barons attack, the struggle for survival begins. The cast is diverse, and race is a factor in this world in which predominantly Black and brown people were left behind in Flood City while mostly White people escaped. This element of the story, which parallels real-life environmental inequities, is mentioned in passing as something Baron histories uncomfortably avoid engaging with and that forcibly strikes Ato when he arrives on Earth. Jarring perspective changes keep readers moving through Flood City and its airspace but can be confusing to follow. Older’s signature infusion of fantastical elements into the dystopian environment grounds readers in the characters’ high-stakes challenges.