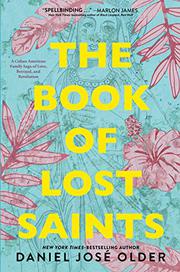 THE BOOK OF LOST SAINTS

A New Jersey man reckons with his family’s history during the Cuban revolution with the help of a needy and persistent ghost.

Ramón’s day-to-day life is pretty simple: work (he’s a security guard at a hospital), play (he’s a popular party DJ), and romance (he’s in a relationship, if a shaky one, with a co-worker). His Cuban heritage is of only passing interest to him, in part because the family lore is so obscure. Did one aunt really kill herself when Castro took power? Did another really escape? Marisol, one of those aunts, isn’t clear on the details herself; and, being dead, her sole investigative option is to haunt Ramón’s dreams and prompt him to do the legwork. This ingenious setup by fantasy and YA pro Older (Freedom Fire, 2019, etc.) gives the narrative an eerie vibe while still taking its history seriously and wraps a tangible story around the notion that history haunts us. A subplot that puts Ramón under threat from an expat Cuban underworld chief further stresses the point and makes the story more than a genealogy exercise. Ramón’s travels reconnect him with family and ultimately deliver him to Cuba in a fine sequence that clears up some of his and Marisol’s inquiries while introducing him to a country that’s actively oppressive when not merely bureaucratic. (The trip also introduces him to Havana’s furtive but defiant gay subculture.) Older trusts the reader won’t closely scrutinize what Marisol can and can’t do as a ghost, and the plotting is rough-hewn. But its voice is solid: Older's narrative smoothly alternates between Ramon’s macho demeanor and Marisol’s more gentle and pleading voice; from America’s hard-nosed culture to Cuba’s more worn-down one; and from ghost story to literary family saga.

A genre-busting tale rife with ghosts, history, and music, at once lyrical and street-wise.