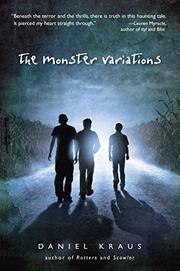 The summer they turned 12, three boys lost parts of themselves: James lost his family and friends, Reggie lost his tough-guy facade and Willie lost his left arm. As he prepares to leave town for college, James remembers that summer and how the invulnerability of childhood quickly succumbed to the ravages of adulthood. Instead of a dark coming-of-age thriller, however, Kraus offers readers a jumble of teen-literature conceits with muddled language, dull characters and a rambling plot. Outside of vocabulary tests, few sixth-grade boys use words like “exquisite” or “penitent,” and obtuse chapter titles are needless affectations. The author writes James’s passive nature into apathy, which transfers to readers. Willie’s quick acceptance of handicapped life borders on saccharine, and the lack of internal exploration over the change appears disingenuous. Reggie’s obsession with the class loner feels cheap, a forced way for him to deal with his own home circumstances. Lacking cohesion, the action falls to shambles, leaving readers with a bundle of words, shadowy characters and played-out literary techniques. (Fiction. YA)