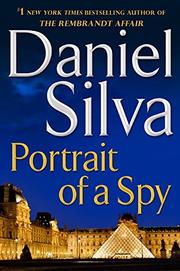 PORTRAIT OF A SPY

Gabriel Allon can scrape away at all that obscures to uncover reality, whether the shadows are blemishes on a Titian masterpiece or the secrets of a maniacal terrorist.

Allon retired from a covert unit of Israel’s intelligence service, the Office. He now restores art, a benign profession he practices in England. Accompanied by his wife, Chiara, also an Office veteran, Allon is visiting London to examine a painting in need of his expert touch. On a busy street, the ever-alert Allon notices a man acting suspiciously and attempts to intervene. But the police see Allon draw a weapon and tackle him instead of the terrorist bomber. The deadly explosion is one in a series orchestrated by Rashid al-Husseini, a brilliant propagandist, and Malik al-Zubair, a bloody radical who learned to kill in Iraq. Allon is soon drafted into an effort to neutralize al-Husseini by his former compatriots at the Office. The Israelis are cooperating with the CIA, the agency duped by al-Husseini—think Anwar al-Awlaki—before he slipped into the jihadist movement. Silva’s (The Rembrandt Affair, 2010, etc.) narrative is linear, moving from London to Paris to Washington and into the deserts of the Middle East. The most affecting character is Nadia al-Baraki, wealthy daughter of Abdul Aziz al-Baraki, an ally of the House of Saud, and a financier who funneled money to the jihadists. Nadia loved her father deeply, not realizing he supported Wahhabi fundamentalism, the sort of religious extremism that resulted in her closest childhood friend being victim of an "honor killing." Nadia learns that Allon is the agent who assassinated her father, but she decides to enter into the complicated plot to kill Malik al-Zubair and to destroy al-Husseini’s movement. Other characters verge on cliché, although they are fittingly intriguing for the genre. Gadgets, back-stabbing machinations and political duplicities lend an aura of realism to the intricate plot.