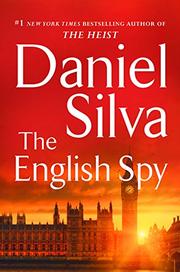 Gabriel Allon may be a talented, world-renowned restorer of classic paintings, but he’s willing to kneecap a Russian spy if necessary.

In Silva’s (The Heist, 2014, etc.) latest, Allon, bravura field agent for "the Office," Israel’s secret spy organization, isn’t worried about art supplies. He’s after Eamon Quinn, a mercenary who was once the Real IRA's top bomb-maker, who's just killed the widely beloved ex-wife of the future king of England, an "immensely shy and beautiful middle-class girl" who turned out to be "wholly unsuited for life in the royal fishbowl." It turns out the princess was collateral damage, her assassination engineered to lure Allon and Christopher Keller, British SAS veteran–turned–professional assassin, into pursuit. The Russian spy agency has hired Quinn to kill Allon as payback for destroying its plot to blackmail Britain’s prime minister into granting North Sea oil rights. Quinn gets a bonus: Keller, his blood-enemy from the days of the Troubles. With Vienna’s, London’s, and Belfast’s mean streets providing atmosphere, Silva deftly weaves together narrative threads and seamlessly drops in back story without boring longtime fans. Allon’s always an empathetic protagonist; now Keller’s character gets depth and nuance. Allon and Keller, ego and id laser-focused on Quinn, are lured into a London bombing and then a gunfight raid at a Real IRA safe house deep in Bandit Country. The realistic and relentless action is framed by bureaucratic back-stabbing and blame-shifting as MI6’s Graham Seymour and MI5’s Amanda Wallace are left to explain more than one double, or triple, agent dead or disappeared.

This page-turner deepens Allon’s legend and illuminates more of his shadowy world, all while cementing Silva’s place among the top tier of spy thriller writers.