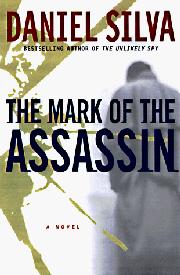 THE MARK OF THE ASSASSIN

Silva, whose debut, The Unlikely Spy (1997), put the WWII thriller back on the map, brings the genre up to date with a vengeance in an exhilarating story that roots razzle-dazzle espionage heroics in contemporary political headlines. The Islamic fundamentalist group Sword of Gaza has apparently claimed responsibility for the Stinger missile attack that brought down TransAtlantic Flight 002, and the President, lagging in the polls a month before the next election, has responded by recommending a costly new antimissile defense system. But wiser heads at the CIA don’t believe that Sword of Gaza shot down the plane. Michael Osbourne in particular has reason to remember the signature wounds in the face of the dead terrorist found near the Stinger launcher, since years ago his lover was killed in the same distinctive way. Now that Michael and his wife Elizabeth are trying for their last chance to have children, he’s called away from her side to go after his bàte noir, the freelance assassin dubbed October, who all but pointed the Stinger at Flight 002, and who’s now agreed to execute all the accomplices to the deed. Michael would be even more worried if he knew about the troubles he had much closer to home—for example, the Society for International Development and Cooperation, those warmongers whose tentacles reach high up in the Agency and the White House itself. The closer Michael gets to October, who’s now taken out a Society contract to liquidate Michael, the greater the danger to himself, his wife, and—thanks to a gleefully inventive series of plot twists—the American political system as we know it. TWA Flight 800, Star Wars, Whitewater, Vince Foster—they’re all here, together with enough soothingly familiar spy stuff (the beautiful killer, the triple-cross, the conspiratorial military-industrial complex) to wring a sigh of pleasure and recognition from the most rabid paranoiac. (First printing of 150,000; Literary Guild selection)