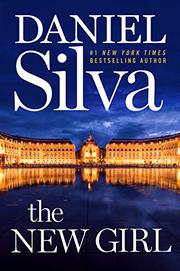 Gabriel Allon partners with a dubious ally in the Middle East.

When a 12-year-old is abducted from an exclusive private school in Geneva, Allon, head of Israeli intelligence, is among the first to know. The girl’s father is Khalid bin Mohammed, heir to the Saudi throne, and he wants Allon’s help. KBM was once feted as a reformer, ready to bring new industries and new freedoms to his country. When he makes his appeal to Allon, though, KBM is the prime suspect in the murder of a journalist. If KBM immediately makes you think of MBS, you are correct. Silva mentions Mohammad bin Salman, Saudi Arabia’s real-life heir apparent, in a foreword. But anyone who recognizes KBM as a fictional echo of MBS might find this book to be more old news than fresh entertainment. In his last few novels, Silva has turned his attention to current world affairs, such as the rise of the new Russia and the threats of global terrorism. In novels like The Other Woman (2018) and House of Spies (2017), the author was inventive enough that these works felt compelling and original. And, in The Black Widow (2016), Silva wrote much of the story from the point of view of the French-born Israeli doctor Allon recruited for an undercover mission while also expanding the roles of a few familiar secondary characters. Allon is a wonderful creation. In the first several novels in this series, he posed as an art restorer while working for Israel’s intelligence service. He adopted a variety of personas and gave readers access to people and places few of us will ever see. Now that he’s a public figure who can no longer invent alter egos, his world is smaller and less fascinating. The pacing here is slow, and any sense of urgency is undercut by the matter of what’s at stake. Ultimately, this is a narrative about removing one horrible Saudi ruler in order to reinstate a less horrible Saudi ruler. This might be solid realpolitik, but it’s not terribly compelling fiction.

It may be time for Silva's hero to retire from the field and let his protégés take over.